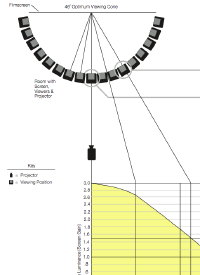 We don’t mean to be picking on the good people at Stewart Film Screens by making an example of their Silver Screen light rolloff curve. They just happen to grace us with the most usable graphic description of what is happening to our light. Looking at Harkness Screens Data Sheet for Spectral 240 3D Screens is not better and may be worse.

We know the problems of getting light to the eyes for any of the available 3D systems. The initial filter eats up to 50% of the light from the projector, plus the manner of each eye getting turned off 50% of the time, and the darkness of the glasses all steal a lot of light. If the projectors could produce enough light to overcome all these transmission problems…which they generally can’t…it would just mean more burnt expensive bulbs and higher electricity costs.

But even if the exhibitor cranks it as best as possible, and tweaks the room to get the best RGB balance at the best seats of the house, if the auditorium is using a ‘silver’ screen to maintain the polarity of the RealD or MasterImage system, the patron who is 23 degrees off the center-axis will have half the light available. Put another way, as you can see from the full picture at the Stewart site, 3 seats away from center is a totally different picture…as is the 4th and 5th, etc., as the situation just gets worse.

If the cinema had achieved 5 foot Lamberts (17 candela/m2) behind the glasses (most don’t get 3ftL – 10c/m2), then 3 seats off center will be 2.5ftL (8.5c/m2). At this point, bright reds have all turned to brick red or darker, and blues are becoming relatively dominant – it isn’t that there are fewer yellows or greens in the picture – it is that the eye becomes better able to discern the blue in the mix. (Another way to describe what is known as the Purkinje shift is that an object that appears greenish-yellow in brighter light will appear to be greenish blue as the intensity of the light descends lower than below 10 candelas/m2.) Combine that with stray light from a few EXIT signs, which not only mess with the contrast but puts non-symetrical data into the normally “practically-” symmetrical 3D mix, plus some reflections in the back of the eyeglasses and the patrons should not wonder why they don’t universally have an enjoyable experience.

We won’t beat this into a pulp since most real-life scenarios just get worse.

What will make it better?

Consumer education to begin, which is the real excuse for this article. Patrons must know what to insist upon.

Projectors can’t generate enough light to get 3D up to the 14ftL (48 candelas/m2) that 2D movies are shown at. But the new Series II projectors can do ‘more’ and industry tests show that ‘more’ is better, especially if the original was ‘mastered’ to be shown at ‘more’. James Cameron was prepared to ship theaters a ‘print’ of Avatar that was mastered at hotter levels for cinemas who asked for it…up to 10 ftL! Patrons must insist that if they are paying more for the experience, they should get better…perhaps 10ftL is not going to be the standard this year, but 7 or 8? Grass roots effort anyone? The studios set the intention in the DCI spec at 14, so one would think that they will come to the plate with ‘more’ if asked. [DCI Specification 1.2; page 48…and tell them that you want an order of Uniformity and some of that ±4 Delta E while they’re at it.]

The future also holds at least two potential ways that will give a better picture. Brian Claypool at Christie points out that one of the features of the Series II projector is “more native support for faster frame rates.” For example, many people in the creative community believe that higher frame rates will do more for image quality than having more pixel resolution. Again, Brian Claypool, “Do you remember how rich every frame was in Avatar, that your eye just kept wanting to look around? Well, imagine having 2 times as many frames for your eyes to follow… it will feel like looking out a window on another reality”.

The other, also long-term, change is replacing bulbs with lasers in the projectors. Good news on that front was announced by one player, Laser Light Engines. We deconstructed their newest announcement and some of their potential at: Laser Light Engines gets IMAX funding—Putting Light on the Subject.

Some mark this as digital cinema’s 11th year, but it wasn’t until 6 years ago that 2K was delivered, an example of the evolution of this industry.