Daniel Frankel’s 3 August The Wrap article presents these two graphs, but doesn’t allow them to speak for themselves…

Whenever Hollywood finds a new cash cow, it dives in and loots its riches faster than any pickpocket on the planet. That’s what the movie industry has been doing with its much-ballyhooed 3-D technology, which has spawned one legitimate masterwork (“Avatar”) but otherwise has been little more than a cushy new revenue source for exhibitors and studios. Both have been raking in loads of moola from the extra $4 to $5 theater owners charge at the box office for admission to 3-D movies. 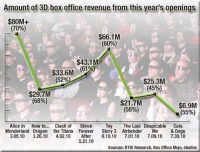 Both articles and their references are worth reading, but one should remember that when 4 or 5 movies come out in a row, and a guy has to drop over $30 for a pair of tickets plus all the other expenses, or a family drops about $100 per movie for four, that a recession might be worth a mention…regardless of how fun being right while knocking 3D happens to be.

Common wisdom is that movies were the one arena that did well in the last recession. What is little noted (and shouldn’t be a surprise to the experts) is that there were a lot of marketing games, specials and attractions to keep the people coming into the cinemas during that era…not 50% addition to ticket prices. There also was a long list of alternative entertainment.

Finally, their premise of first weekend isn’t always a good indicator when the percentage of cinemas with 3D systems is still in the minority. So if, as was the case recently, several 3D movies get released simultaneously, something has to give. Fortunately the professional critics didn’t become economists…since that group doesn’t seem to be helping society recently either.