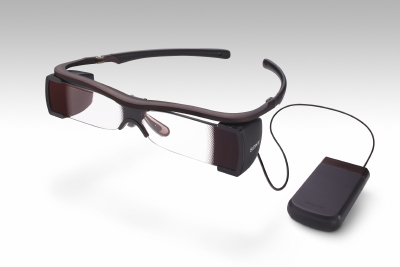 They did this by putting the letters into a small, see-through portion of both lenses and with a little magic sauce the words are suspended in the void between the viewer and the screen. The distance and font size and lateral position were all adjustable. And they were wonderful. But they needed refining and productization. The pairs that USL showed were made with 3D casting techniques that are not fit for production (fragile and expensive.) But the nice part was that they worked with the other equipment that USL has sold for years to the hearing and sight impaired audience members and the theaters who installed them.

At CinemaCon 2011 there was a wonderful off-the-exhibit-floor display of vendors who supplied equipment to the accessibility community. USL was positioned very close to the entrance of the room, but alongside Sony…who were showing a very refined version of the glasses technology that USL had been developing. What appeared to be happening was an interesting combo for exhibitors; the Sony glasses were receiving their signal from USL’s transmitter. But the glasses were light and nicely shaped and amazingly one could see the letters against the screen even in a bright room.

Expectations were that the system would be available around the end of the year…which came and went without any announcements. There were pictures that were smuggled out and passed around the community, but went unpublished even with the news that other vendors were taking orders around the globe. Some examples are the government grants purchasing equipment for hundreds of theaters in Australia and the recent announcement of complete fitting out of closed caption and descriptive audio or audio enhancement equipment at the complete chain of Marcus Theaters (675 screens in 56 theater locations.) Marcus Theatres(R) Completes Rollout of CaptiView(TM) and Fidelio(TM) Systems. Harkness and AMC have made announcements as well.

But Regal was quiet until they made the announcement at CinemaCon with Sony that they would be installing the new Sony glasses and audio system at all their theaters, with the intention of having closed captioning and assisted listening screenings at every show in every theater. Generally speaking this is not impossible but there are still difficulties on the distribution side. The greatest difficulty lies in the narration track which often isn’t completed until after the main movie is ready for shipping. Who wants to take responsibility for missing a release date because the narration track isn’t done? and how many languages are you going to hold the movie for?

Two years ago this dilemma was on no one’s radar. The promise of digital was gaining momentum everywhere but in the accessibility field. The basic standard was set out in the specifications, but they were made without any equipment being made to test whether the ideas worked in reality. Real world experiments proved that the smooth work flow that gave captions and audio in the analog world of film…with equipment that not only wasn’t available but wouldn’t work if it was…was capable of inconsistent jumbles in the digital world. USL’s engineers worked with engineers of other equipment manufacturers to work out compatibility problems during the times of transition between TI’s Series One and Series Two methods of creating letters and shapes accurately positioned on the screen from data files of text. Hundreds of hours of plugfests with no other manufacturer of HI/VI equipment showing up.

Against this background, USL becomes one of a million companies who help shape a technology and get the arrows of the pioneer as the reward. Sony announced that their clients preferred an all Sony implementation rather than a mixed vendor version. The new glasses system are sold with a receiver that also includes an audio jack so that this rechargeable receiver can also provide audio from the stereo assisted listening or the mono narrative tracks. But, they won’t supply the glasses and the audio headsets (not shown at the demo) at the same time.

Notwithstanding, a nice implementation. And yes, before you ask, 3D lenses can be used in combination with the glasses. The implementation shown at CinemaCon had a Regal logo centered on a flat set of lenses that were made to fit (if somewhat clumsily) into invisible grooves in the glasses frame.

Like Doremi, USL also makes a device that is mounted on a goose-neck that fits into the cupholder. As nice as these units are, and as nice as they have worked to block the light from interfering from adjacent seats…these are Model T implementations compared to the Sony glasses. There is no comparison to the comfort of not having to constantly look down and refocus to read the lines of text. Once an audience member gets used to using these glasses, that’s it. They will only go to a theater that supports them. In the United States, this is a good thing, since Regal has nearly 7,000 screens.

Regal has also put a lot of effort into working with CaptionFish, an online group who can guide the audience to open and closed caption screening times as well as note what type of narration equipment is available. Some narration equipment is able to work with the hearing aids of the user, and some users have purchased their own headsets.

It remains to be seen whether audience members will be able to buy their own glasses and listening device, letting the theater be responsible for the transmitter and link to the movie. One would think that it would be a great opportunity for a sponsor to get involved with partial or complete funding. They are more used to working with this model in the legit theater, which also supplies multiple languages for the scenes in opera or during plays.

All in all this is a wonderful time for accessibility in the US. In England, Your Local Cinema has helped the industry move along for some time there, but there is no great motion anywhere else in the EU…and the growth in accessibility seems stalled even in England. No one is talking of universal accessibility the way that Regal is. Perhaps it was the way that the lawyer who had lawsuits against them put it, when he gave his public presentation to the US Department of Justice. (In it he pointed out how minuscule the cost of accessibility equipment would be compared to the previous year’s corporate dividend.) Who knows? But it is a great thing to have happen after so many promises were broken for so long. In the end it is a mutually beneficial enhancement. 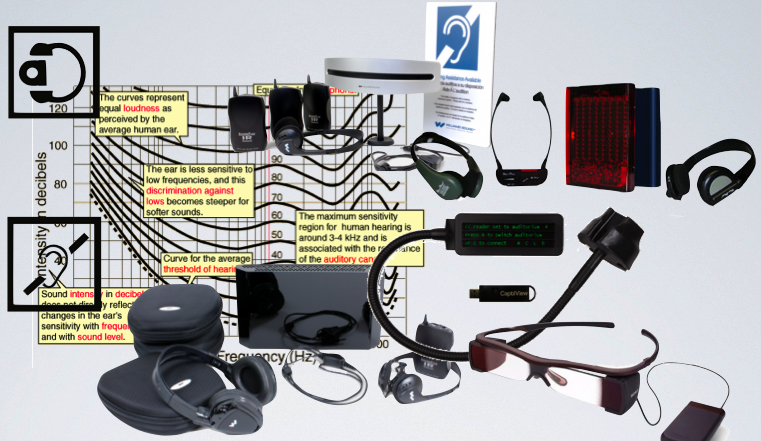