Fast forward sixteen years later. This week, I sat in the Washington, D.C. Digital Captioning Symposium presented by Regal Entertainment Group and National Association of Theater Owners. The symposium participants were representatives from deaf and hard of hearing organizations. In this presentation, we learned that movie theaters are quickly adopting digital projectors, which increases opportunities for movie theatre captioning for deaf and hard of hearing patrons. In considering a “personal captioning device” for a theater, there are five decisions that theater owners take into consideration:

For the original of this article and links to the keen mobile apps, go to:
Theater Captioning: Back to the Future | Keen Scene

With these in mind, we tested four different personal captioning devices for twenty-minutes each as we watched Disney’s “Game Plan,” and I’ll offer a brief summary of how they worked, and a few pros and cons. Note that this is my personal opinion, and not representative of the whole group or the deaf and hard of hearing organization that I represented (Alexander Graham Bell Association for the Deaf and Hard of Hearing). 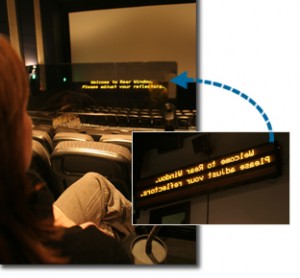 Better known as “Rear-window captioning” Motion Picture Access (MoPix), developed by The Media Access Group, part of WGBH of Boston has been in the market as a first-mover since 1997 and a reliable product.

How it works: An LED-screen is set up in the rear of the theatre and displays three lines of captions in reverse. The user has a transparent reflective plexiglass attached to a “gooseneck” stem that can be positioned in the cup holder. Once a user positions the plexiglass to the optimal angle of the LED screen and screen, captions can be superimposed on the screen.

Pros: The user does not have to worry about any technical difficulties (i.e., battery running out, not having a wireless signal). The depth-of-field is the same as the screen, so there is no eye-strain.

Cons: Getting the right angle and positioning can be challenging. Where you are seated in the theatre makes a difference. The closer you are to the LED screen and to the center, the better. 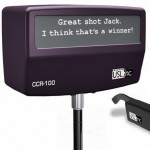 How it works: Attached to a similar “gooseneck” arm as MoPix, a small box with a window displays two-lines of captions that are triggered by the infrared system. The user views the captions inside this “window” (black screen with white text) and then the movie screen.

Pros: The captions are available inside the “window,” so user can easily shift in seat and adjust the gooseneck accordingly.

Cons: Two different depth-of-fields: The user needs to read the captions up close first, then view the screen at the distance. So it creates some eye-strain. I positioned the gooseneck away from me and that helped just a little bit. Second, it is subject to technical difficulty with the wireless transmitter and battery life. (What if the theaterstaff forgets to charge it? or turn on infrared panel?) 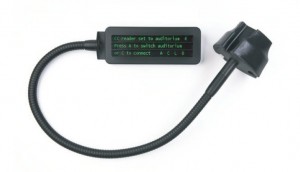 How it works: Attached to a gooseneck, a long, thin OLED panel holds three lines high-contrast captions, outfitted with a privacy screen so that users do not see the captions. (Not unlike the computer film you may put on your phone or laptops.) Captions are received via a wireless transmitter.

Pros: Easy to sit anywhere in the house and adjust positioning of display relative to the movie screen. Letter-boxed captions easy to read.

Cons: Depth of field is not the same as screen, but for some reason, did not bother me as much as USL’s Infrared Captioning System. Maybe it was because I was used to it by that point? Or perhaps the fact that the words were “closer” in the panel, rather than far back in the window. 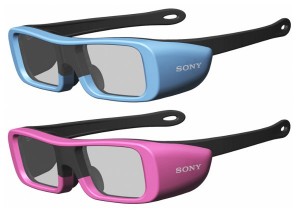 This was interesting and different than the rest. It didn’t require a gooseneck device attached to a cup holder. So yes, I can bring in my soda and be able to easily reach for it! This product, developed by Sony, is in Beta, so I found a similar concept of goggles as you can see to the right.

How it works: Infrared panels transmit captions and user has a small receiver that are attached to a pair of seemingly futuristic glasses. Inside the glasses are clear “screens” that display captions straight out in front of you. (And yes, that means you may see captions on the wall if you turn your head to the side of the theater.)

Pros: Depth-of-field is the same as the screen. Can easily be superimposed on the theatre screen. Virtually no eye-strain. Glasses are consistently positioned on the face, so no need to re-adjust gooseneck when user moves around in the seat. Also, it’s not as conspicuous!

Cons: Just got a bit tricky with real-estate around my ears due to bilateral cochlear implants. But not a deal-breaker. Similar to USL, Doremi, there are areas for technical difficulty by the user.

It’d be interesting if there was an “invisible ink-” style captions actually part of the movie that can only be visible from a special pair of glasses? Or a similar projector from the back that displays captions on top, only visible to a specific type of lens? Any other ideas out there?

It was an interesting day to test out all these devices and watch Disney’s  ”Game Plan” – Of course, with it being Disney, I almost had to reach for some kleenex when we reached the inevitable, predictable happy ending.  It’ll be interesting to see what the theaters roll out in the near future, and I think it’s sooner than we think. It’s definitely an improvement over what I saw at the last Personal Captioning Symposium hosted by Regal in 2006. Keep up the good work!

Catharine McNally is the founder of Keen Guides, which was formed to create more mainstream and accessible tourism experiences for everyone. McNally spends her efforts on user experience and design, video production and distribution, and staying ahead of the accessibility curve. You can follow Catharine on twitter (@cmcnally)