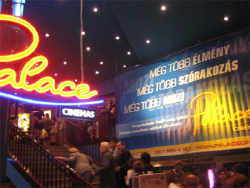 The press release reads as follows:

20 March 2009 – Palace Cinemas announces the addition of twelve (12) 3D-capable digital screens at its sites in Central Europe in the Czech Republic, Slovakia and Hungary. Three will be in Prague, two in Brno, two in Bratislava and five in Budapest in addition to the one in operation since December 2007. Eleven of the sites will use the Masterimage 3D technology while Palace West End in Budapest will add an additional Real D system. The Barco projectors and XDC servers were provided through XDC and installed by Film-Ton-Technik (FTT). Palace Cinemas’ first wide 3D premiere will be Monsters vs. Aliens, a DreamWorks Animation production. There will be a special sneak-preview on 25 March at Palace Cinemas in the Czech Republic followed by a general release in the Czech Republic and Slovakia on 26 March and Hungary on 2 April.

“We are extremely excited to bring to our customers the very best in entertainment and 3D technology. It’s a revolutionary technology that will radically change the business,” says V.J Maury, CEO of Palace Cinemas. He adds “Palace Cinemas was the first to introduce digital projection to its markets in 2002. Our experience as an early-adopter of digital has given us invaluable experience. Our current expansion ensures that filmgoers in all our markets now have the opportunity to experience the many great new films being released in 3D this year.”

Country Manager for Czech Republic David Horacek says, “We are eager to build on our earlier experience and expand into both Prague and Brno.” “We see an audience eager to experience 3D at both of our sites in Bratislava,” notes Slovakia Country Manager Andrea Baisova. “We believe Palace will have the best digital 3D offer in Hungary now with six screens in Budapest,” comments Andrea Lovasz, Hungary Country Manager.

Palace Cinemas Central Europe is the leading cinema company in the Czech Republic, Slovakia and Hungary with 20 sites and 170 screens, with plans for further expansion. Palace Cinemas includes Palacemedia for cinema ad sales and Palace Pictures for distribution. The company consistently leads the market in new technologies including digital projectors, 3D, e-tickets, full web services and its own management software End 2 End (E2E). Palace Cinemas is dedicated to giving its customers a great night at the movies with its commitment to People, Entertainment and Fun.

Palace Cinemas was founded in 1999 by Arthur Goldblatt and V.J Maury. It is majority owned by funds managed by ARGUS Capital Group Limited (“ARGUS”), a private equity fund manager focusing on Central and Eastern Europe. ARGUS was established in 1998 and is supported by leading institutional investors from Europe, North America, the Middle East, and Japan. With total commitments of approx. €400 million in its two funds, ARGUS has invested in thirteen companies in the CEE region over the past ten years.