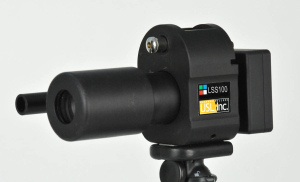 Importantly, it is also a networked device, making it possible for theater owners to monitor auditoriums continuously from a Network Operation Center (NOC) anywhere in the world, providing instantaneous monitoring of luminance, chromaticity, and SPL data.

“We decided to build on the success of our PSA light and PCA color meters to create an automated way to ensure excellent picture quality,” said Jack Cashin, USL’s founder, president and chief technical designer.

The release of these products show that the industry has matured beyond the one-time post-installation set-up. The idea that digital is everything, including stable and reliable, requires one thing that the cost of digital did away with: constant and consistent monitoring. The Projectionist has largely been replaced by the “booth attendant”, which who is not a substitute.

Not that there is anything wrong with the booth attendant, as long as they are able to use the tools given them to learn how to create a better environment for their audience. The advantage of the Meyer/NTi Cinema Audio Analyser, in conjunction with the Harkness Screen Checker is that it brings a pair of eyes and ears into the auditorium.

They can test the picture and the audio from several positions in the room and learn their environment. They can listen for rattles and new hum components. They may not pick it up at first, but just like the audience, they will be aware that something is wrong and seek to get it fixed before the audience decides that their home system is more pleasing.

They can, once a week, run the SMPTE DProVe DCP in every room to check whether things have changed.

They can walk around with a pair of Sony caption Glasses or USL headsets or Doremi OptiGrabs and check the HI/VI system.

“To some extent, this is the problem with a device like the Digital Test Tools Digital eXperience Guardian (DxG) and the USL LSS-100. They rely upon someone setting the parameters so that alarms go off at the right time, and get to the right people,” says Digital Test Tools evangelist (and DCinemaTools editor) C J Flynn.

“Sure, the DxG can let the NOC know that the THD of the left woofer has gone south, or a new rattle has appeared at the right front of the screen, or that the white point has shifted out of the SMPTE spec. But if the NOC is filled with generalists who don’t realize what that means for the picture, then it is little better than a booth assistant who sends an SMS to the Regional Tech Chief that says, “I got some reports that the audio sucks in Theater 6. What changed yesterday? I don’t know – these reports are from a couple weeks ago – when you left on vacation.

“But these tools used in their proper place would be as an adjunct to a constant and consistent Quality Assurance Plan, a procedure that involves everyone in the organization like ISO-9001 does – that would be optimum. That’s way we push Post-Installation Compliance concepts like what was presented to UNIC for CineEurope2012 Innovation Award. This is what we mean by having a feedback loop in the operation, which is the only way that digital can “take care of itself”.

“One has to beware of any press release that “ensures” anything, that says there is “no compromise”. Engineering is the Art of Compromise. There can only be so many seats in prime position, but the most astute owners can minimize the flaws when they pay attention to details and don’t get seduced by simple solutions that “ensure” success.”

For these and other reasons, DCinemaTools has begun the series called, The Art of Compromise: A Series of White Papers Explaining the Considerations and Choices Involved in Getting from There to Here.

[Was the editor really quoting himself? Yes, just to make sure it was clear that he was wearing a different hat as a manufacturer for that bit and not as the writer of this piece…weird but trying to be disclosing.]