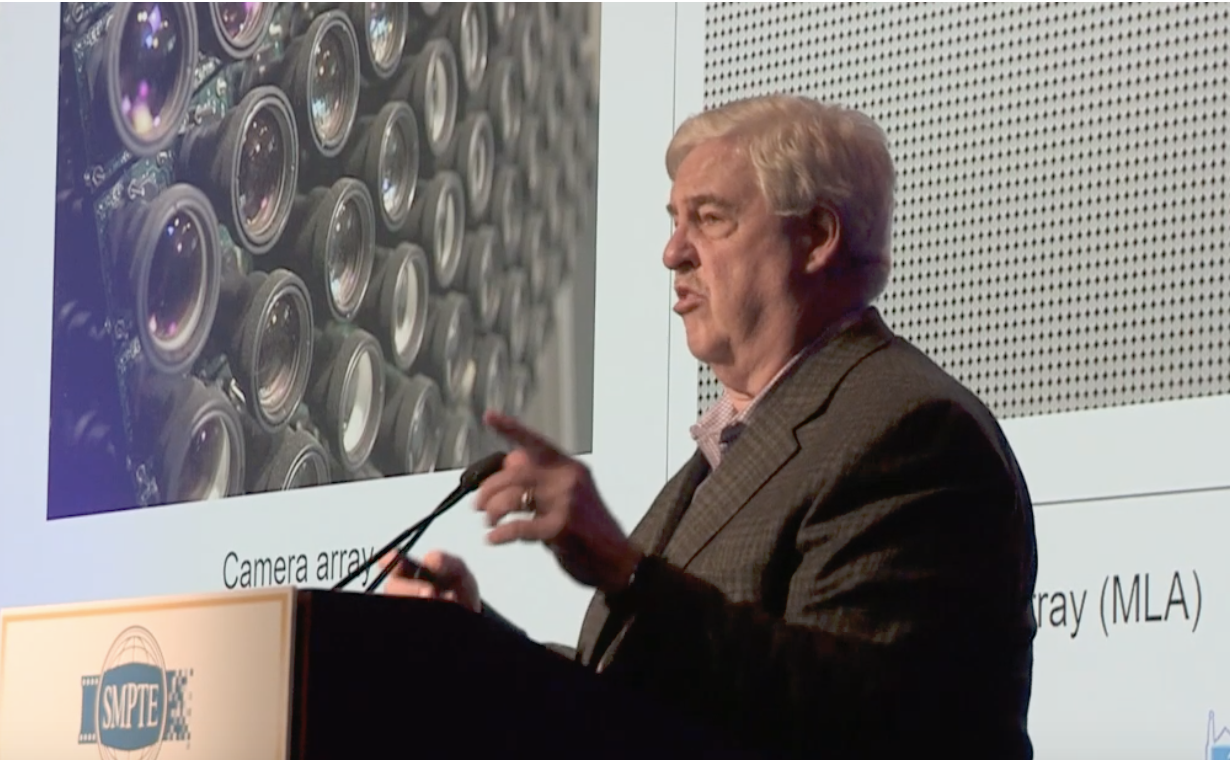 There are a few things to notice as Mr. Ludé gets past the basics and into the meat of the matter. For example, at just before minute 24 he starts talking about how – in the future – these huge amounts of data representations for light might be handled. First is reference to the order of magnitude for storage and manipulation, and second is the evolution of the devices that what we now call game engines to handle this information.

What he would have said if he had the time and were disposed to more exposition and basics is how much data manipulation is currently done in a typical animated or CGI scene that vectors leaves moving and creeks getting exposed to the light that the leaves just allowed to touch the water or reflect off some stone near the water. Current 2D 2K technology doesn’t really allow all that is required to do a great job, so algorithms are used to constrain the scene to some practical/compromised number of layers that the director is willing to let go by.

4K is still around the bend for all but the biggest budgets, but, given what was possible 10 years ago for that technology and the push to make animations for the coming 8K Tokyo Olympics, one can imagine that there will be constant money to keep increasing capabilities.

Another thing to notice is how people who are close to the bleeding edge of video technology had interesting basic questions – even errors in fact – that Mr. Ludé was able to not only answer but give example about.

Light Wave Technology. Not coming to homes or theaters soon, and not holograms – which is an entire discussion in itself – but certainly in the future.

Pete stated about 15 minutes in that the size of the LEDs probably wouldn’t be getting smaller than the 1 micron size of the smallest bacteria since we are getting down to the size of the wavelength of light. Although we have learned that there is no limit to the way that technology can always go past “won’t/can’t get any faster/smaller/more powerful”, we must leave that for the future to decide. One or two breakthroughs in quantum computers and/or making microwaves manipulate light and we are off to who-knows-land.

But, how small is micro____? And how does that relate to a micron? Since we were kids, the name of these smaller than small terms have been tossed in the air and re-arranged by the ISO. The greek letter ‘mu’ is the chosen one – and ‘μ’ is the symbol and in usage it is micrometere (if you follow the ISO) or micrometer in English speaking countries. But ‘micrometer’ is also used in English as the name of a measuring tool, so, be aware. By the way, mu is also seen in italic, like this: ‘μ‘, but technically that is the old and no-longer-used symbol. …oh, and in Greek the word μικρός (mikrós), means “small”. …oh, and add 3 zeros and that is ‘nano’ size.

Bacteria can indeed be that small, but not usually smaller – they generally range 1 – 10