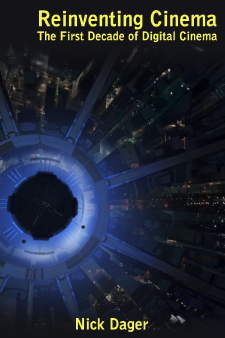 To be sure there were serious efforts prior to 1999. JVC with their D-ILA technology can make a legitimate claim for the first digital cinema demonstration. On March 19, 1998, they collaborated on a digital presentation at a cinema in London. Another early effort was the movie The Last Broadcast, which may have made cinematic history on October 23, 1998 when it became the first feature to be theatrically released digitally, via satellite download, to theatres across the United States. Wavelength Releasing, Texas Instruments, Digital Projection and Loral Space headed that effort. In 1999, it was repeated across Europe using QuVIS technology and The Last Broadcast became the first feature to be screened digitally at the Cannes Film Festival. In 2000, Disney, Texas Instruments and Technicolor worked with several U.S. and international exhibitors to deploy prototype digital cinema systems in commercial theatres. Technicolor assembled and installed the systems using the TI mark V prototype projector, a special Christie lamp house and QuVIS’s QuBit server with custom designed automation interfaces.

But the Phantom Menace digital screenings generated widespread visibility and publicity and developments began to occur on a more regular basis. The Society of Motion Picture and Television Engineers began work on standards for digital cinema in 2001. The Digital Cinema Initiatives formed in March 2002 as a joint effort by Disney, Fox, MGM, Paramount, Sony, Universal and Warner Bros. The serious technical groundwork was being laid. The rest, as the cliché goes, is history.

The challenge? To literally rethink, retool and reinvent, from the ground up, a global industry that had worked successfully for a century. Read that sentence again to get a sense of how overwhelming – and some would, and did, say unnecessary – that task would be and you may gain a greater appreciation for how much was actually accomplished in a decade.