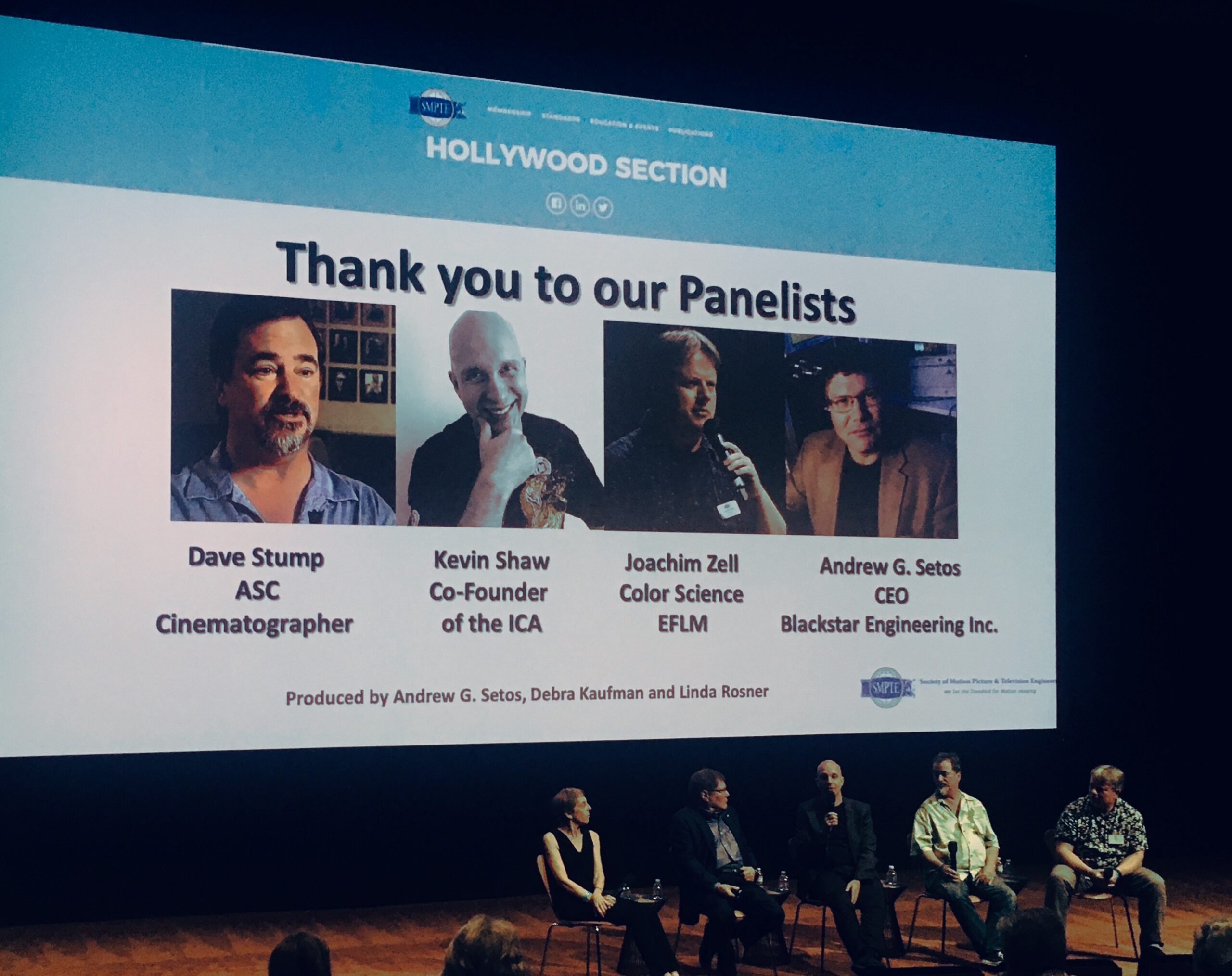 The panelists of both events discussed and showed many things with great nuance. Many flavors of the CIE chart were presented by everyone, with a touch of explanation for each – and the star at both events was Pointers Colors. The undiscussed star was: Library. It reminded one of 2007 SMPTE/NAB CinemaDays, when Chris Cookson from Warners made the point that every effort would be made to encourage producers to produce in 4K, even at greater cost and complication, because: Think of the Library. Now, when asked, what color space do you consider for the producer and how is that influenced, the unchallenged quip was: What color is the ink on the check.

The immediate question of what color space to work in ranges from quick and dirty unscripted television and less demanding wedding productions to movies shot on film and delivered to the Netflix streaming specNetflix streaming spec. All agree that the course of TVs in the home and the high end of cinema is some version of larger color spaces. All agree that the future viewer will be used to seeing at least the P3 space, if not more. Cinema is already there with P3, with an advancing capability toward 2020 – perhaps what Bill Beck used to call 1919, or what Dave Stump calls P3 and a half. Home TV is being sold as 2020 capable, but deliverables are at best – with some exceptions – P3 in a 2020 container. DVD (in the 601 space) and Blu-Ray (in the 709 space) has been on a downward trend, with fewer and fewer sold (notwithstanding the Lionsgate announcement last week of John Wick III selling three million units in combined packaged media (DVD, Blu-ray, 4K HD), EST and Video on Demand rentals), and it seems that industry leader Samsung is throwing in the towel on 4K UHD Blu-ray.

What the colorists group first saw was the latest advancement of finishing tools in Dolby 4.0, presented by Greg Hamlin. Although technically 4.0 has been released for a while, it takes quite a while for the components to be developed and then incorporated into the post production equipment and – pointed out many times – having a great capable monitor, something well above the minimum requirement of 1000 nits. Appreciating his resume, people appreciated his guidance – start with the automated analysis and improve from there depending on what you need. Among the nice improvements that new equipment is starting to facilitate are many nuanced choices in color management like secondary saturation and trims, which have been strong wishes for a while, and the ability to take in and push out to Apple’s ProRes 4444 XQ instead of being ‘limited’ to 16 bit TIFFs. 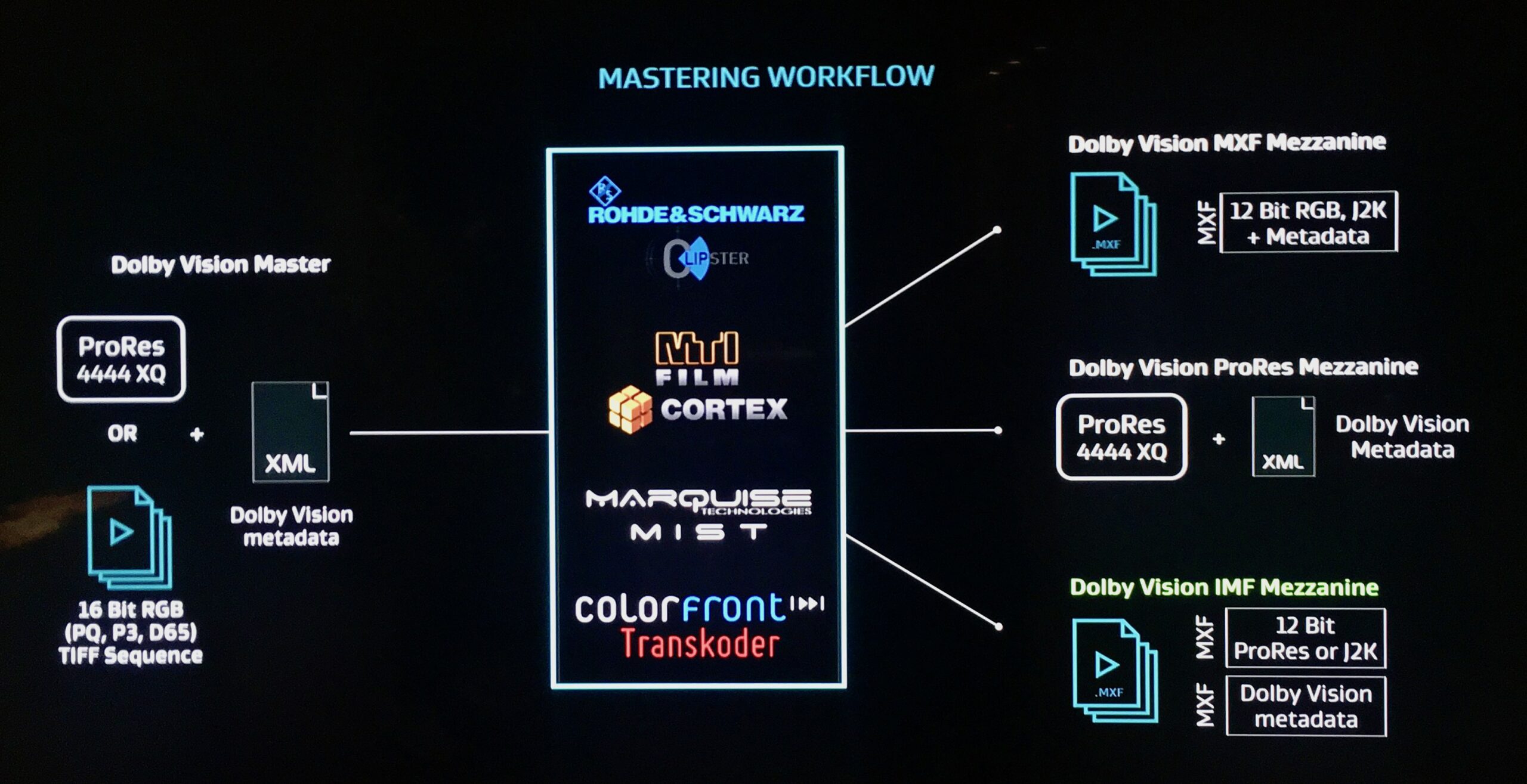 Larry Chertoff led part 2 of the Colorists exploration by showing the latest advancements in MTI’s Cortex system – too much detail to explain, but again, automatic analysis combined with elegant views of light and color – almost as if you are watching audio go by – bring very clever precision to the colorists game.

For a roundup of details and the complications, see the SMTPE Technology Essentials Series Webcast HDR, 4K, and Beyond from Molly Hill, Applications Engineer, Dolby Laboratories.

Mystery Box also has a nice summation at: DOLBY VISION AND INDEPENDENT FILMMAKING