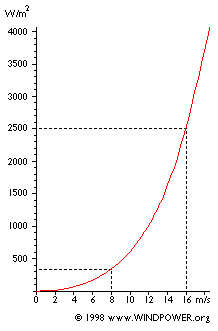 In the case of the wind turbine we use the energy from braking the wind, and if we double the wind speed, we get twice as many slices of wind moving through the rotor every second, and each of those slices contains four times as much energy, as we learned from the example of braking a car.

The graph shows that at a wind speed of 8 metres per second we get a power (amount of energy per second) of 314 Watts per square metre exposed to the wind (the wind is coming from a direction perpendicular to the swept rotor area).

At 16 m/s we get eight times as much power, i.e. 2509 W/m 2 . The table in the Reference Manual section gives you the power per square metre exposed to the wind for different wind speeds.

It goes on from here of course. We’ll close with the Table of Contents: