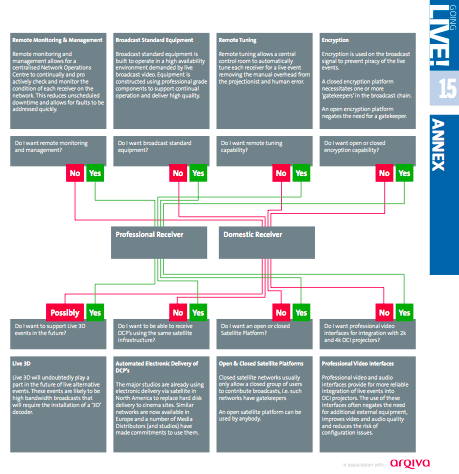 There are 4 other topics, just as important, but not as buzzword compliant? Why not?

Because the standards in this field are off in the distance.

That can be better said. Today’s standards are many. A cohesive standard is off in the distance, but components of it will be implemented on an adhoc basis. The loser will be the facility who can’t adapt…and likely, one won’t know until the last moment.

For example: What if a right’s holder decides they want to put a professioal grade encryption on the next live event? Will the consumer box that has been used successfully for opera all these months work?  No. Can it be modified to work. No. Will a professional box be able to accept a code at the last second via the ethernet port (a port that the consumer box doesn’t have!)? Yes.

If there are problems with lip sync, can the projectionist adjust the consumer unit? Need you ask?

The report can be downloaded from the EDCF website. Don’t forget to support the European Digital Cinema Forum when you can. The Member’s Only site has many more interesting documents. Membership is not onerous.