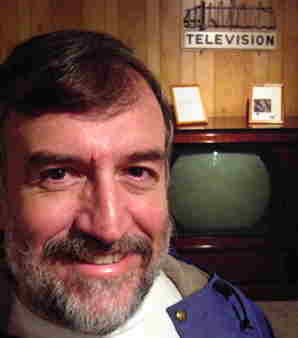 Mark Schubin is a multiple Emmy-Award-winning SMPTE Fellow who has worked professionally in television since 1967.

This article is edited below; whole segments are left out…there is also a Part 1 on the MobilizedTV site.
Read the entire article at: Mobile 3D: Muscles Matter | Mobilizedtv

Psychophysics has already played a role in mobile TV.  Handheld at a typical viewing distance, …  So, when Fox delivered a mobile-TV version of the popular series 24, each “mobisode” had a very short duration (initially one minute, later increased to three), with louder sound effects, more close-ups, bigger bullet holes, and more blood.

At the 2009 SMPTE Digital Cinema Summit, University of California Professor Martin S. Banks described experiments he had performed concerning that perceptual disagreement.  “This is really the first evidence that a vergence-accommodation conflict can cause fatigue and discomfort.”

It’s not an entirely new discovery.  Writing in The American Journal of Physiological Optics, Leonard Troland said, … to modify the normal coordination of the ocular reflexes of accommodation and convergence.”  That was in July 1926.

DreamWorks head (and 3-D fan) Jeffrey Katzenberg, speaking at the International Broadcasting Convention in September 2008, said the last thing 3-D should do is “make your audience hurl.”  …

Banks suggested to the Digital Cinema Summit that the conflict might be reduced by increasing a viewer’s “zone of comfort.”  …

In 1895, the Lumiere brothers presented the first cinema audience with motion pictures of a train arriving at a station.  They were silent, black-&-white, jittery, and showed the train moving at an angle, but that was enough, according to a contemporary report, to cause an audience member to jump up in fear until the last car had passed through the frame.

In 1919, Thomas Edison staged a “tone test” at a concert hall, defying members of the audience to tell the difference between a live opera singer and a phonograph recording of her voice.  A reporter for the Pittsburgh Post wrote that he couldn’t.

Today, we might laugh at the idea that the Lumiere and Edison audiences couldn’t tell playback from reality, but that’s only because …

Consider seasickness.  First-time sailors tend to suffer from it, but those who’ve spent long periods on boats get over it.  Muscles, too, can be trained.  …

So it’s possible that viewer training will get around the convergence-accommodation 3-D problem even on mobile screens.  A short 3-D piece, followed by a recovery period, and then …

Unfortunately, eye-fatigue and nausea are only one of the perceptual issues associated with 3-D mobile TV.  There’s also, for example, the infinity-interpupillary problem.