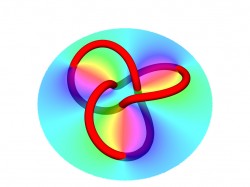 Read the entire article at: Physicists Tie Beam of Light Into Knots at the Universe Today site.

This article originated as a paid article with a lot more depth at: Isolated Optical Vortex Knots in nature magazine.

At DailyGalaxy.com we learn of superluminal speeds, anomalous dispersion, and

…, a brilliant young Spanish physicist, João Magueijo,  has been pondering the heretical question: What if the speed of light—now accepted as one of the unchanging foundations of modern physics—were not constant?

Magueijo, a 41-year old native of Portugal, puts forth the heretical idea that in the very early days of the universe light traveled faster—an idea that if proven could dethrone Einstein and forever change our understanding of the universe. He is a pioneer of the varying speed of light (VSL) theory of cosmology -an alternative to the more mainstream theory of cosmic inflation- which proposes that the speed of light in the early universe was of 60 orders of magnitude faster than its present value.

Other interesting stories with great shots at today’s UniverseToday.com

Are We Just ‘Lucky’ to See Activity on Enceladus?

Astronomy Without A Telescope – Getting Orientated