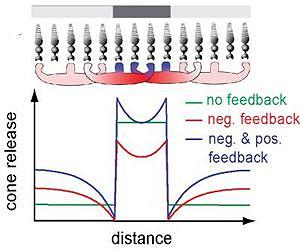 “One of the big success stories, and the first example of information processing by the nervous system, was the discovery that the nerve cells in the eye inhibit their neighbors, which allows the eye to accentuate edges,” said Richard Kramer, UC Berkeley professor of molecular and cell biology. “This is great if you only care about edges. But we also want to know about the insides of objects, especially in dim light.”

Kramer and former graduate student Skyler L. Jackman, now a post-doctoral fellow at Harvard University, discovered that while light-sensitive nerve cells in the retina inhibit dozens of their close neighbors, they also boost the response of the nearest one or two nerve cells.

That extra boost preserves the information in individual light detecting cells – the rods and cones – thereby retaining faint detail while accentuating edges, Kramer said. The rods and cones thus get both positive and negative feedback from their neighbors.

Jackman, Kramer and their colleagues at the University of Nebraska Medical Center in Omaha report their findings in the journal PLoS Biology. Kramer also will report the findings at the 2011 annual meeting of the Association for Research in Vision and Ophthalmology in Ft. Lauderdale, Fla.

Read the rest of the article at: Why the eye is better than a camera at capturing contrast and faint detail simultaneously

Cones normally release the neurotransmitter glutamate in the dark, while light decreases glutamate release. This graph of neurotransmitter release shows what happens when cone cells are exposed to a dark spot in a light background (top) under various scenarios, including no feedback (green trace) and only negative feedback from horizontal cells (red trace). Negative feedback to many cones enhances edges, but would decrease detail in dark areas were it not for newly discovered positive feedback that is localized to only a few cone cells (blue trace). Credit: Richard Kramer lab, UC Berkeley