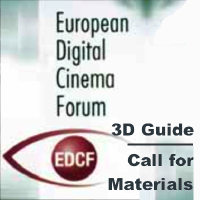 As an example, the Alternative Content in Cinema Guide begins with a Mark Schubin treatise on the History of Alternative Content, then logically follows with Frank de Neeve’s ICTA seminar on Programming. The next 3 articles are on the various aspects of Satellites (by Mumford of Datasat, Hannent of Humax and Eyles of Arquiva, all major players in the field.) Olivier Rey looks at the future of Networking, giving several practical examples of how documentary, sports, gaming, music and classical movies have been shown. Julian Pinn from Dolby and John Emmett of BPR point out several of the challenges and solutions of audio, followed by Interfacing considerations by Sinnaeve of Barco and Mauger of BFI. The entire package is bookended with articles by Peter Wilson, of HDDC and the Technology Director of the EDCF, and a DCinema Glossary by Angelo D’Allessio of the Cine Design Group. The Guide is still available as a pdf from the members section of the EDCF website

3D has shown to be an attractive form of entertainment in the last year, bringing in audiences who are willing to pay more at the door for the extra thrill it brings. The field is moving as the technology improves. Several manufacturers have introduced new products. More than a dozen major features have been announced from the studios.

Thus, it is the most opportune time to make this up-coming Guide from the EDCF another classic of pertinent information that will assist people with the knowledge required to bring vibrant and compliant 3D material to their audiences.

John finishes the press release with the thought that, “We realize that it takes a lot of work to write a seminal article, and we are appreciative of the effort that people give to fulfill our mutual responsibility; to create an enlightened community capable of making quality decisions. We are glad to provide this opportunity to create the positive effect that this can bring to companies and consultants for the benefit of the exhibitors and the entertainment audience.”

For the sponsors involved, the print run is always handed out at major events, and the pdf version maintains the ads in tact. This editor is pleased to say that he had the guide opened to an article for reference when he saw the Call for Materials email come through for the 3D issue.

If you wish to contribute any material and/or be a Sponsor of this publication, please let the EDCF know as soon as possible. Write John Graham at the link provided.